WRT has been selected to design two park projects, Heth’s Run in Pittsburgh’s grand Highland Park, and a system of new parks for the neighboring community of Larimer. The two projects will provide valuable open space for the adjacent neighborhoods of Morningside, Highland Park, Larimer and East Liberty, connecting them to the Allegheny River and providing sustainable stormwater management for the Heth’s Run and Negley Run stream valleys. 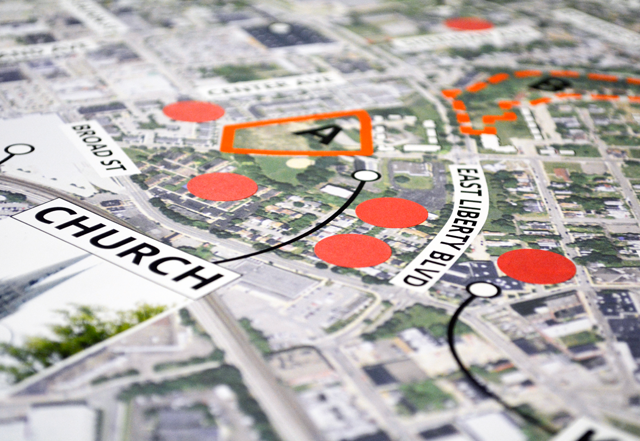 Since the late 19th century, the Heth’s Run valley has been filled with slag and urban debris, burying the creek and providing a rare and valuable level surface for public use in this hilly city. The valley floor now accommodates 1500 parking spaces serving the Pittsburgh Zoo and PPG Aquarium. Working with the City’s Department of Public Works and the Pittsburgh Parks Conservancy, WRT principal Eric Tamulonis, ASLA, LEED AP and landscape architect Charlie Neer, ASLA will lead the firm’s team to reclaim the valley and transform it into one of the city’s signature spaces and civic gateways.  The project will connect to the neighborhoods, combining recreation and ecological design with major parking for Highland Park and the Zoo, a leading cultural economic engine for the city.

The redesigned parking lot, along with the trails and bioswales, a playing field and other recreation facilities, will reclaim this overlooked area of Highland Park, reinforcing the city’s other park improvements and the new Butler Street bridge. The new development will also provide the opportunity for a “living exhibit” highlighting habitat conservation and demonstrating low impact, high performance civic site design at this highly visible portal to the city near the new Butler Avenue bridge.

“Before it was a parking lot, the area was a beautiful valley and stream in City parkland. This project will reclaim the area and transform it into landscape and bio-habitat,” said Mike Gable, Director, Pittsburgh Public Works. “We are thrilled with the designs WRT provided, not only do they meet the Zoo’s mission but they will enhance our community by offering residents more park space.”

On the other side of Highland Park, WRT will work with the City’s Urban Redevelopment Authority and Pittsburgh Parks Conservancy, to design a new framework of neighborhood open space in the Larimer/East Liberty neighborhoods. Through a robust community and stakeholder engagement process, the team, also led by Tamulonis, with Garlen Capita, urban and landscape designer at WRT, will develop conceptual level design for a three-part linear park, including detailed design and implementation of a new signature neighborhood park. The project will help to alleviate deadly longstanding flooding in the Negley Run stream corridor.

The project will serve the recreational needs of current residents and leverage investment in new mixed-income housing currently under development through a HUD-funded Choice Neighborhoods Implementation Grant. Larimer has been planning for redevelopment since 1998 when the community created the Larimer Community Plan with the overarching goal of “establishing Larimer’s identity as a state-of-art green community.” The adjacent East Liberty neighborhood has been transformed in recent years into one of the city’s more vibrant economic centers, the focus of major public investment and private real estate development.

“We’re thrilled to be working with the City, the URA, the Pittsburgh Parks Conservancy and the residents of these four east Pittsburgh neighborhoods,” said Tamulonis. The communities have been pushing for improved park space for years and we look forward to helping them achieve their vision. Highland Park and the Pittsburgh Zoo are two regional assets and we believe that once complete, all of Allegheny County will feel the benefits.”

“WRT was chosen for these projects not only for their proven success in designing urban parks and open spaces that are both beautiful and functional, but because they understand the vital importance of community input”, said Pittsburgh Parks Conservancy Curator Susan Rademacher. “They share our belief that strong community and civic partnerships coupled with creative design will make Heth’s Run and the neighboring Larimer parks spectacular green spaces for all to enjoy.”

The planning and design process is expected to be approximately 12 months followed by a 12-18 month bidding and construction phase.