March 24th, 2022
The Importance of Cultural Burns for the Mariposa Creek Parkway

In this Q+A, representatives from the Southern Sierra Miwuk Nation, Sierra Foothill Conservancy, and WRT explain cultural burns and why they're being implemented in the Mariposa Creek Parkway project.

Following the implementation guidelines of the Mariposa Creek Parkway Master Plan, a community-based vision prepared by WRT in 2019, restoration work within the Mariposa Creek corridor has begun. This work aims to remove invasive species (notably Himalayan blackberry) through hand-cutting, a series of cultural burns, and replanting native riparian species of traditional significance to the Southern Sierra Miwuk tribe. Cultural burn practices have been implemented for centuries to manage the foothills landscape and are a significant part of the region’s heritage and identity.

In this Q +A, Tara Fouch Moore from the Southern Sierra Miwuk Nation, Allyson Brooks, Community Engagement Manager for the Sierra Foothill Conservancy, and John Gibbs, Principal at WRT, explain cultural burns and why they're being implemented in the Mariposa Creek Parkway project.

CULTURAL BURNS WILL HELP PRIME THE CREEK CORRIDOR FOR REVEGETATION WITH NATIVE SPECIES.

Why are cultural burns so important?

Tara Fouch Moore, Southern Sierra Miwuk Nation: As every Californian knows, we are living in unprecedented times in which the thought of wildfire evokes serious fear and anxiety.  What many don’t realize, but fortunately is becoming more and more recognized, is that these are fire-dependent (or at least fire-resistant) ecologies and native people have used fire for millennia to sculpt the landscape into the biodiverse utopia that was “discovered” by settlers.  Fire was used to invoke a variety of outcomes—better basketry materials, more fruitful harvests, even for better grazing to attract game animals for hunting.  By using intentional fire, our ancestors implemented a holistic landscape management strategy that equally benefited themselves as well as the flora and fauna with which they lived. Today, those practices face extinction, and it’s no coincidence that our wild lands are also in declining health.

Allyson Brooks, Sierra Foothills Conservancy: The lack of fire on our lands for the past 100 years has led to an extreme build-up of ladder fuels, which can cause a fire to burn hotter and move faster, providing a “ladder” for fire to enter into the canopy of the forest. Examples include shrubs such as manzanita, weeds, and smaller trees. The recent Creek Fire in the Shaver Lake area was the perfect example of this phenomenon. The dead trees from the bark beetle, along with the buildup of ladder fuels made this fire behave in an extremely aggressive manner, destroying over 850 structures and 380,000 acres of forest. Traditionally, the fire regime for this area is about every 15 to 20 years (typically lightning-caused). This prevented the build-up of ladder fuels. Controlled burning has the same effect in reducing ladder fuels and preventing such extreme fire behavior. 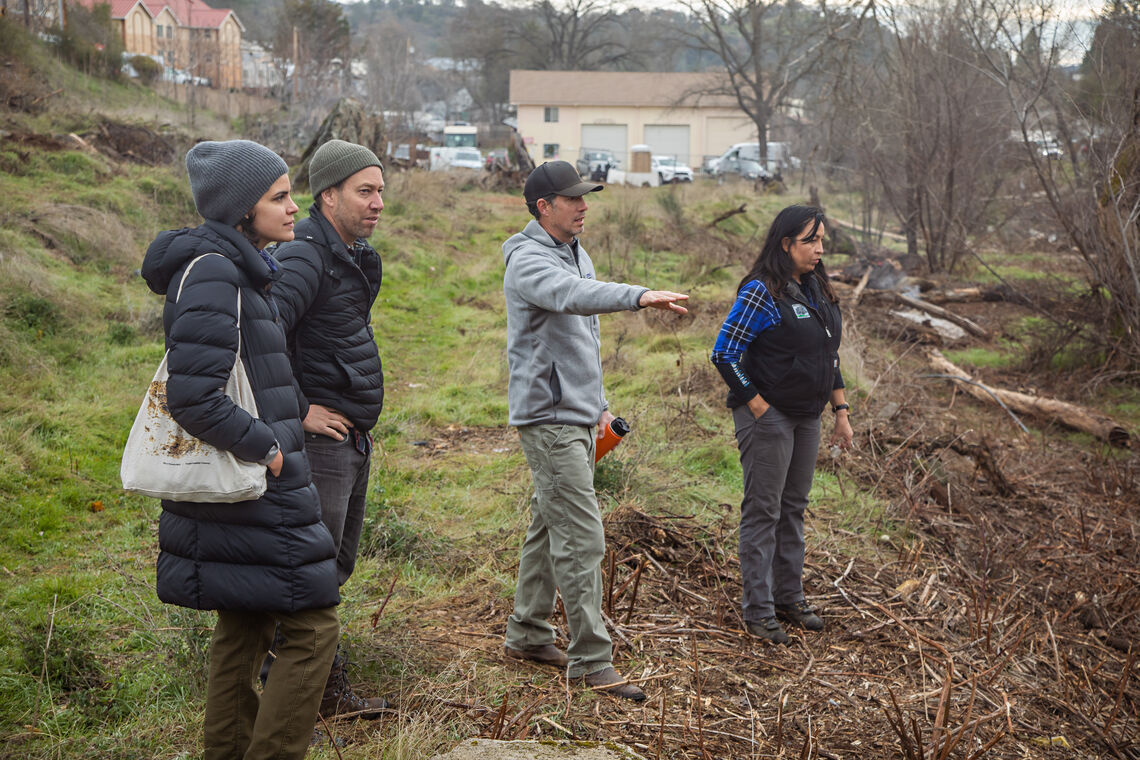 John Gibbs, WRT: Restoring native plant species will in turn encourage more wildlife and promote better resiliency in time of flood or fire as endemic ecologies are better adapted to the increasingly extreme variability of the California climate. In addition, the restoration will foster a better experience for users, by opening up viewsheds and creating a better sense of safety and visibility on the trail, while also educating them about their local ecology.

What are other benefits of cultural burns?

Allyson Brooks, Sierra Foothills Conservancy: The burning of existing vegetation returns carbon and other essential life elements to the soil for use by future and older vegetation and, therefore, organisms up the food chain. Many plant species, particularly native plant species require regular burning for growth quality. Some examples include elderberry, red bud, and Carpenteria. When burned, these plants return stronger and straighter (which makes them helpful in Native basketry). Some larger trees, like the Giant Sequoia have serotinous cones that require extreme temperatures (fire) to regenerate. By reducing ladder fuels, more water remains in the water table for larger remaining vegetation. Also, after a fire, there are fewer plants and, therefore, less surface area from leaves for water loss (transpiration).

John Gibbs, WRT: Our design process is all about connecting people to collaboratively think about their environment. In Mariposa, we have brought diverse stakeholders together around environmental education, arts and culture, and social health issues. This community loves getting involved. The cultural burn uniquely connects people to the land in exciting ways.

What is the significance of Mariposa and its adjacent lands to the Southern Sierra Miwuk Nation?

Tara Fouch Moore, Southern Sierra Miwuk Nation: The lands now recognized as Mariposa County and Yosemite National Park have been continuously inhabited by indigenous people for millennia. The members of present-day Southern Sierra Miwuk Nation are descendants of this region’s first people. Many of these families have never moved out of the area and continue an unbroken relationship with our ancestral homelands. We are incredibly fortunate to walk the same paths, eat the same foods, and swim in the same waters as our ancestors.  In order to honor that history, our tribe must make efforts to steward these lands and promote balance between the modern ways of life and the ancient ecologies of this landscape.

John Gibbs, WRT: This project is about a creek, a town, and a region. We are positioning the town more prominently in the context of Yosemite and Sierra foothills in order to enrich people’s experience of the land. Native peoples had the experience of living and moving among these landscapes for a long time. Let’s learn from that.

Why is the collaboration between Sierra Foothills Conservancy and Southern Sierra Miwuk Nation so important?

Allyson Brooks, Sierra Foothills Conservancy:  As a land trust, charged with preserving the land, we can learn so much from traditional ways of tending to the land. The Native American people have lived in this area longer than any other group. They are aware of stewardship practices that benefit the land and we need to listen.  The Indigenous ways of life show extreme respect and proper care for the environment. 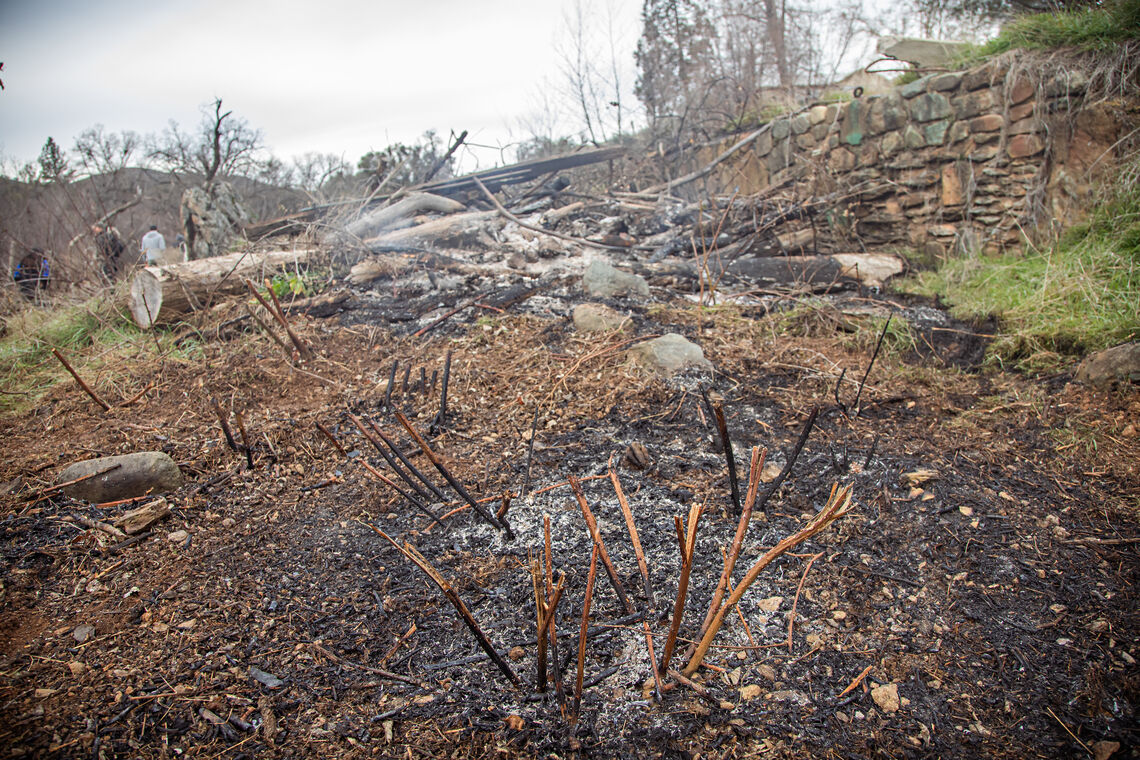 John Gibbs, WRT: In addition to the Sierra Foothill Conservancy and the Mariposa County Arts Council, the cultural burn project provides opportunities for a range of other stakeholders to shape and benefit from the Mariposa Creek Parkway, including, tribal youth, fire science students from Mariposa County High School, curriculum designers at local environmental education organizations like NatureBridge, and others. We hope this project has helped to bring people together around a compelling vision.

Tara Fouch Moore, Southern Sierra Miwuk Nation: As a conservancy charged with the permanent protection and stewardship of natural resources and a tribe descended from the original stewards of these lands, we have similar goals in regards to restoring landscapes. The Southern Sierra Miwuk Nation has yet to achieve federal acknowledgment status, so we have extremely limited resources.  Although we’ve historically maintained our traditions and practices on our own, it’s become apparent in recent years that we can further our own goals and build out stronger programming by collaborating with SFC and other aligned partners. There is a mutual benefit in that our traditional knowledge can offer a more holistic perspective to the conservancy’s efforts, while creating greater opportunities for our tribal members to relearn this traditional knowledge and affect real change in their homelands.