Every now and then, a project comes along to remind us how much our work can mean to the people we design for. For many of us at WRT, the John C Anderson Apartments (JCAA) is one of those stand-out projects. 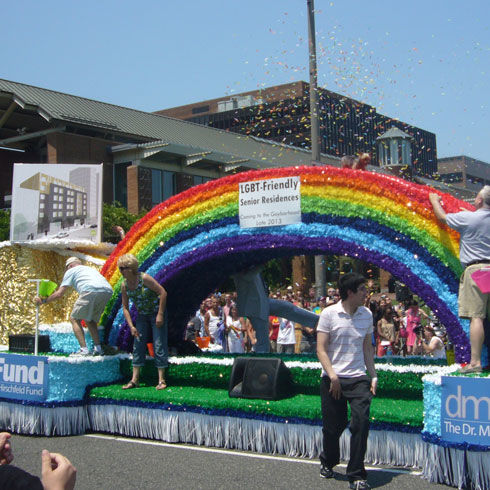 As a part of this uniquely challenging urban infill project, we had the opportunity to collaborate with truly diverse groups of stakeholders. Once complete, JCAA will provide much needed affordable senior housing, reinforce a strong sense of community pride, and in the process, make a little history as well.

The JCAA arises from an appreciation within Philadelphia’s LGBT community of the great courage shown by its elders in the early fights for gay rights, and a recognition of the challenges folks still face in finding safe, affordable and accepting accommodations in which to live their senior years. Leaders in the community have been working tirelessly behind the scenes for years to develop the coalition of political, governmental, and private support necessary to make this 56-unit project a reality. WRT’s been there for much of that time, doing our part to help push this project along. Now under construction, it will be only the second affordable senior housing project in the country to be developed with active involvement by an LGBT community.

For many people in the community, the project’s official “coming out” happened during this year’s Gay Pride Parade. Large rendered views prepared by WRT were given their own dedicated float and were greeted with cheers as the parade made its way through the city. And, did we mention that it garnered the “best float” award? For some of us, that’s even better than an AIA honor!