Acre by acre, urban development is an economic winner for cities.

It’s no secret that municipalities across the country are facing perilous budget deficits. But instead of raising taxes or cutting services to generate more tax revenues, cities should leverage their urban settings. Downtowns and urban areas have the potential to bring in a vastly higher amount of public monies per-acre than low-density, auto-oriented development. And if this leads to less people driving, it can be a boon for the local economy as well. It’s a win-win.

Consider this example: a suburban Wal-Mart brings in an impressive $20 million in tax revenue. But it sits on 34 acres of land, thus yielding $6,500 an acre in taxes. Meanwhile, a downtown department store with similar revenue brings in $634,000 per acre due to its dense nature. In the same city, it would take 600 single-family homes on a 150-acre subdivision to equal the tax base of a downtown 30-story office tower on 0.5 acres. Simply put, urban development is more efficient at creating tax revenues for municipalities. Urban development is also an economic winner for the local economy. According to AAA, Americans spend about $8,500 a year on their cars, $7,000 of which leaves the local economy. If a city could limit auto-oriented development, invest in their urban cores, and encourage say, 15,000 people to get rid of their cars, the local economy would gain over $127,000,000 it otherwise would have lost.

By leveraging urban acres and building their local economy, cities can get back to solid financials. 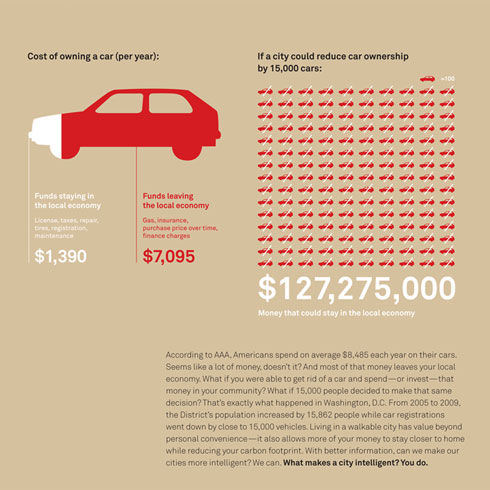